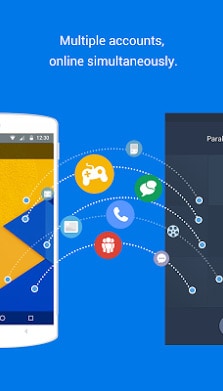 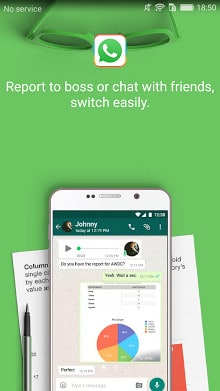 Trying to log in to multiple social networking or gaming accounts at the same time?
Parallel Space is a revolutionary app that allows you to simultaneously sign into two different accounts on a single Android device.
How it works:
Parallel Space creates a separate space in your Android phone. Users sign into one account through the app icon downloaded to the phone directly, and the other through the app icon in the Parallel Space application itself. Switching identity is done in one tap, without needing to log in and out of separate usernames.

• Powerful, without occupying all your phone storage : As small as 2MB.
• Secure: Parallel Space does not take any unique personal user information.
• Messenger apps: To connect with different contacts on a second account.
• Social apps: To share separate photos with different accounts.
• Gaming apps: To play with two accounts at the same time and double up the fun.
• Compatible with most Android apps.

Pros and cons of parallel space

With parallel space, you can handle more than one account of a single app installed on your phone. This is a great functionality that is hugely welcome by android users. Using the app is very simple, and the process behind it is the creation of a virtual space on your phone, hence, apps will run in it as though they are running on another device. The app runs in your phone, then the second app runs in the parallel space.

For any problems, please feel free to contact us via the feedback feature or send us an email: [email protected]
Follow us on Facebook for the latest news: facebook.com/parallelspaceapp
Join us on Google+ Group: plus.google.com/u/0/communities/100090325501431514560