Platform games are known to be one of the oldest and classic genres of video games. The Mario franchise was considered to be the most successful names when it comes to platformers. Thanks to easy controls, these games have entered into Android market. You can find some of the best mobile platform games at Apps APK with decent graphics and easy controls.

Platform games are basically a subgenre which belongs to action games. These games are designed so well that players of all ages can play them without any time limitations. In this genre, the character jumps and climbs through the separated platforms and also avoid obstacles.

For more depth and thrill, developers add uneven terrains of different heights in environments. The player can control distance and height of jumps somehow to avoid falling to death and missing some important jumps. The jump button is a very common aspect of platform games. Other elements vary according to games, such as swiping to jump or pushing to crouch.

These games also include some other acrobatic movements like grappling hooks and swinging from vines and other objects. These elements are also used in other genres, and are basically known as platforming. But this genre doesn’t include the games where character jumps automatically.

Platformers have naturally come a long way since 1980s. Practically, they are based on a hero who navigates his way down from one platform to another. These games are usually influenced by several other genres. These days, platformers have also adopted RPG elements. It means your hero gains EXP points, become stronger, and acquire better gear. Like old-school classics, such as Contra, there is no lack of epic action shooter platform games. Since platform games have seen so much popularity, they are being downloaded by millions of users. 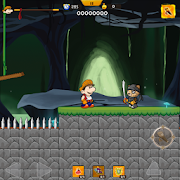