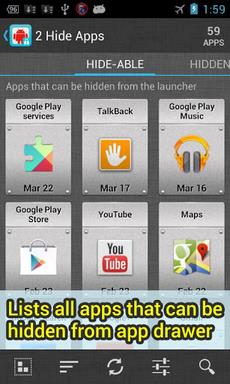 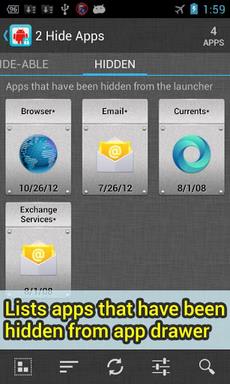 You don’t care for all the useless apps your carrier adds to Android? Do you want to remove carrier and manufacturer bloatware apps?
Well, now you can get rid of them! This app lists hide-able apps and helps you to hide system (built-in) apps from the application drawer.
. batch hide apps
. list hide-able and hidden apps
. ICS style UI
. sort apps by name, size or installation time
. batch uninstall apps
Due to the limitation of Android, the system apps cannot be uninstalled. 2 Hide Apps can help you to disable system apps, remove their icons from the app drawer, and clean space for the useful stuff.
Disabling apps is a way to basically freeze and hide any unused, unwanted, or unruly system apps that came on your phone. Another reason you might want to disable an app is if it is causing problems for your system, whether it be battery drain or lag.
At first, you may think, Why would I ever need to do that? But if you look at it from a control perspective, you’ll quickly realize that this move could be perceived as a slap in the face to carriers and their need to install bloatware, or apps that they have installed on your phone through partners which cannot be removed. It’s also a way to disable rogue system apps that may be gobbling up battery, are running too often in the background, or that you wish were unavailable to users of your phone.
Bloatware, as we refer to these carrier-installed apps, typically cannot be removed by a simple UNINSTALL. Many of them have been permanently placed at a system-level storage on your phone, which means you cannot manipulate them without having superuser power over your phone. So if you want to remove the trial of EA’s latest game or the suite of Amazon apps that you wouldn’t normally have installed, disabling them will at least hide them from your view. It’s not the optimal situation for control freaks, but it does at least get them out of your app drawer and keep them from running in the background.
We have been selected as a Google I/O 2011 Developer Sandbox partner, for its innovative design and advanced technology.