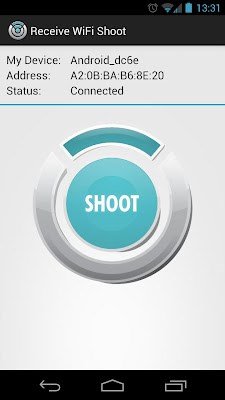 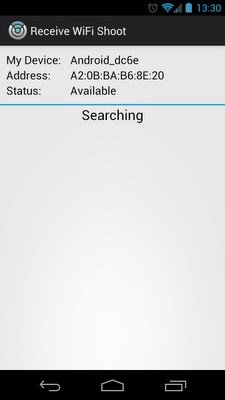 WiFi Shoot it is the first app in the Google Play to use the WiFi Direct technology to wirelessly transmit photos, videos and any file directly between two Android devices!
If you’re having any problems email me your device model and what you tried to do to make it work that I’ll reply as fast as possible.
————

Full/paid version advantages:
– transfer of any file type
– transfer files of any size
– transfer of multiple files at once
– several speed optimisations that reaches up to 3x transfer speed (compared to free version)
————

Compatibility notice:
This app theoretically works with any pair of ICS+ devices with WiFi Direct support. But unfortunately, due to bad implementation of the WiFi Direct drivers by individual device manufacturers sometime devices are not compatible with each other, don’t work multiples times until a reboot, or simply decide not to work at all. For example, the Galaxy Nexus on ICS used to crash and reboot the device just by turn on and off the wifi direct a few times, and that have nothing to do with the WiFi Shoot, it was just on the device settings menu. Unfortunately there’s really nothing that WiFi Shoot can do to work around those specific devices issues. I strongly suggest users having those kind of problems to send angry e-mails to your specific device manufacturer customer support.
If it does not work on your device, DO NOT BUY THE PREMIUM, it won’t change anything!