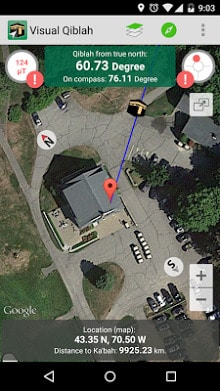 Why Visual Qiblah?
Visual Qiblah was developed to overcome the pitfalls and shortcomings of many other Qiblah applications:
. North measured by mobile sensors may vary up to 90 degrees from the true north, consequently Qiblah calculated from north in mobile applications may result in a serious deviation from the Qiblah direction. Visual Qiblah considers this reliability issue and overlays the Qiblah on Google Maps™ so that the user can visually verify Qiblah with nearby features, such as buildings, streets, and do the needed alignment.
. Magnetic deviation, induced by nearby metallic objects (e.g. mobile leather case) and electronic devices, can cause the sensors to behave unpredictably. Visual Qiblah identifies abnormal magnetic field strength and warns the user.
. Magnetic declination (the angle between true north and magnetic north) at user’s location is another source of confusion (e.g. In the South America magnetic declination reaches 17 degrees). Visual Qiblah calculates Qiblah from true (geographic) north. Additional information about Qiblah from magnetic north at user’s location is also provided for those who prefer to use real compass.
. Visual Qiblah uses formulae to calculate Qiblah that are accurate to within 0.5 mm (0.020?) on the Earth.