Home » All Apps » The Translate App 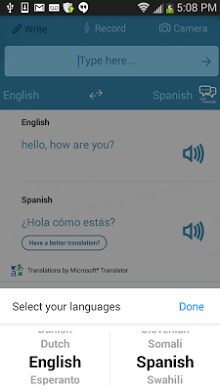 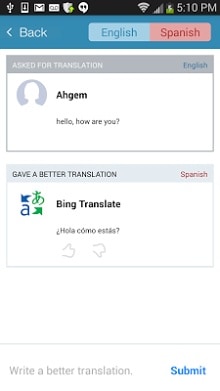 The Translate app is one of the most popular translation apps available today. Get the ability to translate over 80 languages instantly via text, speech and images! It’s your own FREE personal translator!

Available Only on Translate App!
The Translate App sets itself apart from other translation apps with two features: 1) Human Powered Translations and 2) Live Translate:
1. Human Powered Translations –
With human powered translations, you can ask our global community of translators for the most accurate translations. Get translations from native speakers, people who would know that language best.
2) Live Translate –
The Translate App is the only app that enables you to translate and communicate to another person in a foreign language, in real time.
It’s also the only app with capability to let you start a conversation with another user who has a different (OS) operating system — Android can connect to other mobile devices and other mobile devices can connect to Android. Users are not limited to their operating system.
How Live Translate works:
Let’s say an English-speaking person and a Spanish-speaking person want to communicate. One user sends a code to the other users’ device to start a Live Translate conversation.
After both users have joined the same Live Translate conversation, then either user can start speaking to each other.
Example:
•    English speaking person speaks into their Translate app
•    The Translate App records the English phrase then translates it instantly
•    Within a few seconds it played back (in Spanish) on the Spanish person’s device.
•    And vice versa