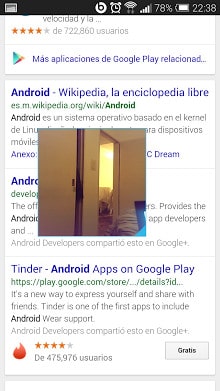 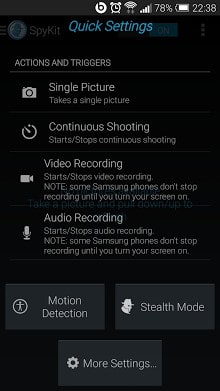 Introducing SpyKit™ – the best way to take images in stealth.
SpyKit is a revolutionary new app that gives you the power to capture media without your suspect knowing – with just a tap, you can begin recording video and audio – and your phone will look completely routine. Become a spy with a device that 1.5 billion people have – your smartphone, without the spy budget!
This is the only app in the Play Store that lets you capture media with your screen off!

Features
•Take pictures, record video, audio and more without raising suspicion!
•Easy to use and simple to setup.
•Motion sensing and hard key activation.No need to turn your screen on!
•Remote activation using a simple SMS.
•Cool looking desktop widgets.
•Dropbox sync
•Hard Key Activation
SpyKit is easy to use and it even allows you to trigger capturing using the hard keys on your device – that innocent volume button is now a destructive tool! What will you capture with SpyKit?
•Floating Camera
Your suspect will be none the wiser as you capture evidence in your favor! Keep a low profile or not… SpyKit is completely foolproof and won’t get you into trouble! Use your phone and capture at the same time using the Floating Camera function – record live video in a small window that only you can see – you can continue using your phone as usual.
•Password Protected Gallery
Been caught? SpyKit has your back! It’s password protected gallery means that only you can see what you have captured – and they will be left wondering what is inside! SpyKit is inexpensive spy gear – and you don’t need to be part of MI5 to use it!