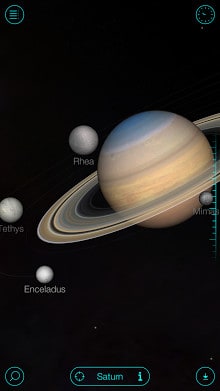 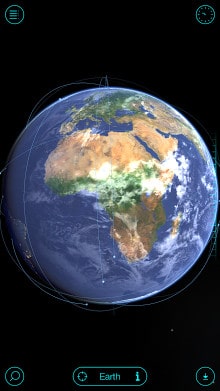 Explore Saturn and its moons: travel in time, read info and watch photos.

Enjoy the beauty of one of the best known and most beautiful planet in the Solar System. Saturn is mostly known for its rings and numerous moons. The easy navigation through the app makes the experience of surfing the Space really breathtaking and unforgettable.

IMPORTANT: This free demo shows the Saturnian system of moons and rings. Full access to all solar system objects is available through In-App purchase.

Remember building a solar system in high school? Cups and papier-mache balls are in the past, because Solar Walk is an interactive orrery that shows all planets and satellites of the solar system in their correct positions in real time.

This 3D solar system model lets you navigate between planets, see their positions on a specific date, explore how they move and why. You will see the entire Milky Way galaxy from a far and zoom in to study all the planets and satellites in close-up, learn their trajectories, inner structures, history of their exploration, and geography.