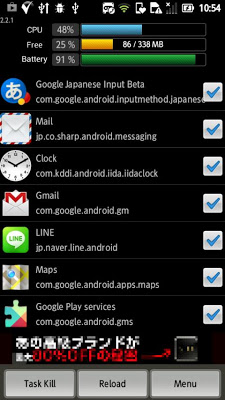 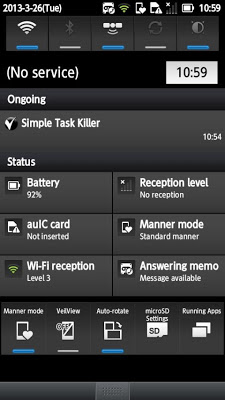 #Summary
Simple-Task-Killer enforces the applications to terminate their tasks simply and in safety. Then it increases available memory, improves activity of the device, eventually minimizes battery consumption. Free Simple Task Killing tool, is this !
It has been designed for even beginners of an intelligent-phone to handle intuitively !

#Functions
– Momentarily termination of tasks
– Transition to a detail page of application
– Transition to an uninstall pane of application
– Displays a ratio of CPU occupation
– Displays available memory
– Displays a quantity of remainder of the battery
– The ignore-list which is used for registering applications to be excluded or masked
– Registers recommended applications into the ignore-list
– Terminates both applications and STK itself
#Features
1. Non-resident software-Andriod2.3 or more
Popular task-killing softwares are continuing to be activated, and consuming memories. However, STK goes on the other way !
STK quits itself very fast just after terminating its action by a RETURN or HOME button.
Task-killing function itself continues to be a permanent resident ? A nuisance, isn’t it ?
Such a contradictory feature shouldn’t be implemented. Just for this reason STK has been designed like that.
Especially, the following function would never be implemented now and in the future.
One-tap-killing by using widget
Automatic-killing by supervising the activity of an application in background
Though the paid STK has similar one-tap-killing function to an widget, but big difference is non-resident behavior that has been fulfilled by using a quite unique short-cut.
The users of ICS or later (Android 4.0 or more), can use this function, just try it !
2. Fastest operation
The operation getting a task list is very much faster than that of pre-installed other task-killing applications or task managers !
3. Particular looks
A ratio of CPU occupation, available memory, a quantity of remainder of the battery, are shown on a display. That isn’t cool enough !?
4. Manages active applications
By selecting a task from the task list pane, the management pane will appear, then you can uninstall an application or delete cache memory.
Therefore you would never be bothered to open the application management pane.

#Q&A
Q. Want to kill application by one-toutch. Doesn’t STK implement an widget ?
A. An widget is always a resident, so STK does not implement it. Paid STK is equipped with a one-toutch killing function. (Android4.0 or more)
Q. Even after terminating a application, however it immediately appears again. Why ?
A. This is caused by the specification of Android OS. The pre-installed application which belongs to the configuration type, that needs to be continuing activated such as Facebook, is structured to reboot automatically .
Any function can terminate operation of an application temporarily, but no function would be able to re-terminate such application that reboots itself even after terminated once.
Q. Want STK that will not re-boot an application.
A. STK’s basic concept is not to implement a resident function, therefore STK has no plan to implement a supervisory function that requires an application to suppress self-reboot.
Q. How to use the ignore-list ?
A. Those applications registered in the ignore-list will disappear from the application list, which appears after STK is activated.
This means that STK ignores whether they are operating or not. In other words they have already been put outside of STK’s management.
Such applications that need to be always activated as “An alarm clock” and “E-mail”, should not to be registered in the ignore-list to avoid a risk of terminating their operation.
When add an application in the ignore-list, first tap its name in the application pane, then next pane will pop up, finally tap “Add to ignore list”.