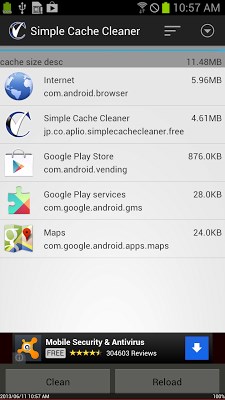 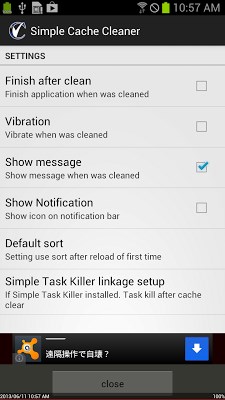 #Summary
Simple cache Cleaner is an application that can easily erase cache. Erase cache and make the operation of an Android device comfortable ! An easy way to handle it ! Activate the application, then just push a button of “Clean”.

#Functions
– Bulk deletion of cache.
– Sorting
– Uninstalls the application
– Displays a cache size of each application
– Transition to the list of services activated
– Simultaneous termination with “Cleen button”.

#Features
1. Non-resident software-Andriod2.3 or more
Most of popular cache-cleaners are resident type, therefore they continue to be being activated and be consuming memory. But “Simple Cache Cleaner” is a non-resident type.
This is designed to quit itself quickly after having terminated an application by “HOME button” as well as “RETURN button”.
You would see the big difference, if compared to other applications.
“Simple Cache Cleaner” does not implement such contradictory function that “cache cleaning” itself continues to be a resident, and consume memory.
Mainly, the following function would never be implemented now and in the future.
– One-tap-cleaning by widget
– Automatic-deleting or informing, by supervising memory consumption in background.
2. Inter working with “Task Killer”
Inter working function with the simple and high-peformance task killer, “Simple Task Killer”, is equipped. By this function, only one button operation can delete cache and terminate a task, it is very recommended to try this inter working function.
*: In order to enable the inter working function, you would be required to install this application, as well as “Simple Task Killer”.

#Q&A
Q: Can this application save power ?
A: This application is designed for the purpose of intentional releasing of memory, which has been occupied by other application. It is not for enhancing the effeciency of saving power.
Q: What is cache ? Is it better to delete ?
A: Cache is the area for an application to temporarily stores its frequent use data.
A lot of Android devices do not have abundant amount of memory. Therefore, the operation of an Android device could become comfortable by regularly deleting cache.
Q: Doesn’t this implement an widget ?
A: The widget is always a resident, so “Simple Cache Cleaner” would not implement it now and in the future.
Q: Doesn’t this delete memory automatically ?
A: Like the widget, that function is always a resident, so “Simple Cache Cleaner” does not implement it now, and also wouldn’t have any plan to implement a resident function in the future.
Q: A short-cut has disappeared, why ?
A: When being moved into SD card, a short-cut may disappear. This seems to occur in some kind of devices by malfunction of itself. In such a case, it is recommended not to move this application to SD card.
Q: It has disappeared from the notification-bar , why ?
A: This has occured by the specification of Android OS. When this has once been moved into SD memory, that application will not become active again even after the device would have been re-booted.
Q: The cache does not seem to have been deleted, why ?
A: This problem may be caused by distinct malfunction of some kind of Andriod devices. If this problem could not been resolved even after re-installing this application, please avoid to use it.