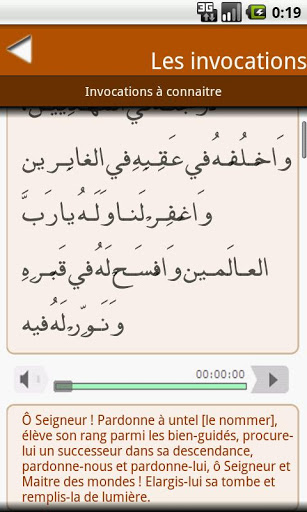 The salat janaza in France
The purpose of the application is to inform the Muslim salat holding janaza (funeral prayer) in the Ile de France and some major cities in France.
Features:
• Find: section to view the salat janaza reported.
• Learning: section to learn how to perform the prayer of the dead and the invocations associated with funeral rites.
• Report: section with a simple form, without registration, by which one can point to hold a funeral prayer.
The Prophet (peace be upon him) said: “Whoever follows the funeral of a deceased Muslim faith and relying on the divine reward, attending prayer and burial, with a return reward worth two Qirat [unit of]. Each Qirat with the grandeur of the mountain of Uhud. If only attending the prayer without attending the funeral, he will get one Qirat. “(Narrated by Al Bukhari)

The funeral prayers in Islam
All deceased Muslim holds various rights of his brothers to the wash, wrap in a shroud, to follow his train, to pray over him, and bury it. This site aims to help enforce any of its rights, to ensure that increased the number of priors about the deceased Muslims in France and around

A great scholar encourages us to continue!
On Friday, April 10, 2009 (14 Rabi Thani 1430), we have personally questioned about the legitimacy of our action the noble scholar Ibn Saleh Al-Fawzan Fawzaan-Allah preserve him, who did not hesitate to acquiesce our work and encouraged us to continue. Here is the translation of the answer:
The question: Dear scholar, this question comes from France and reads as follows: is it permissible to announce the funeral prayer (salat janaza) of a deceased person to multiply the number of priors (on death), because in France few people are aware of the celebration of a funeral prayer as they are often performed in hospitals. For this, we created a website to advertise such events, is it possible or not?
The answer: This is good; announce the death of a Muslim so that people come together to perform the funeral prayer over him and plead for him is a good goal and a noble purpose. There is no harm in that, because the Prophet (peace be upon him) announced the death of Negus (An-Najâchy) on the day of his death and informed of his death and met with his companions to pray at the deceased’s funeral prayer of the absent. (NDT, for the Negus died in Abyssinia, the Prophet was informed by revelation in Medina. This was narrated by Bukhari and Muslim).