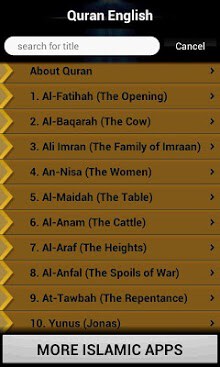 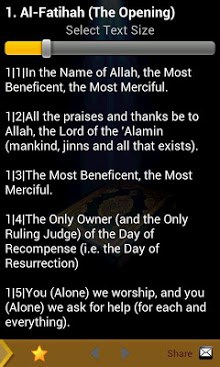 Read the English Translation of the Meaning of Quran. App Features:
* English Translation
* Easy browsing of Chapters
* Search box
* Mark any Sura/Chapter as Favorite
* Text Re-size Bar
* Share via Email
Islam is a Semitic religion, which has over one billion adherents all over the world. Islam means “submission to the will of God”. Muslims accept the Qur’an, as the word of God revealed to His last and final prophet, Muhammad (peace be upon him). Islam states that Allah sent messengers and prophets throughout the ages with the message of Unity of God and accountability in the Hereafter. Islam thus makes it an article of faith to believe in all the earlier prophets, starting with Adam, and continuing with Noah, Abraham, Ishmael, Isaac, Jacob, Moses, David, John the Baptist and Jesus amongst many others (may peace be on them all).
About the Qur’an: The Qur’an literally meaning “the recitation”, is the central religious text of Islam, which Muslims accept as the word of Allah(God) revealed to His last and final prophet, Muhammad (peace be upon him). It is regarded widely as the finest piece of literature in the Arabic language. The Qur’an is composed of verses (Ayah) that make up 114 chapters (suras) of unequal length which are classified either as Meccan or Medinan depending upon the place and time of their revelation. Muslims believe the Quran to be verbally revealed through angel Jibril (Gabriel) from Allah(God) to Muhammad (peace be upon him) gradually over a period of approximately 23 years beginning in 610 CE, when Muhammad (peace be upon him) was 40, and concluding in 632 CE, the year of his death.
This is an English Interpretation of the Qur’an by Muhammad Taqi-ud-Din al-Hilali and Muhammad Muhsin Khan.
DISCLAIMER: The Qur’an was originally revealed in the Arabic Language. No translation of Qura’n can be a hundred percent accurate, nor it can be used as a replacement of the Qur’an text. We have tried to provide a mostly acceptable english interpretation of the Qur’an in this App, but we cannot guarantee it’s 100% authenticity and/or accuracy. Please feel free to contact us if you come across any mistakes!