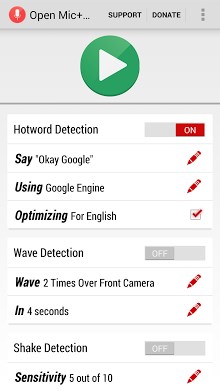 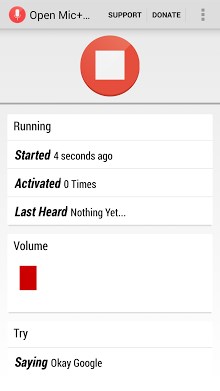 As Featured on XDA, LifeHacker, SlashGear, Android Community, Android Headlines, Droid Life, Phone Arena, Android Spin, dotTech, AndroidInt’l, and more!
Google Now, Everywhere.
With Open Mic+ for Google Now, access all the commands from anywhere on your phone, while driving, or while away from your phone! Simply say “Okay Google”, wave your hand, or shake your phone. Screen on, screen off Google Now will be ready to listen.
WHAT DOES THIS MEAN?
Google Now becomes more conversational as after a search just say Okay Google to start a new one. And even better get the answers to your questions while your hands are tied, or when you’re on the couch, or in the car.
TOMORROW’S FEATURES TODAY
Everybody’s talking about the new Touchless Controls features for the Moto X, but now any phone that is running Jelly Bean or higher can have the same experience.
SEAMLESS
Open Mic+ will run in the background and can be configured to start at boot so that it truly becomes part of the phone.
TASKER INTEGRATION
Truly automate your device by combining the endless command list of Tasker with the ease of access of Open Mic!
OFFLINE
Open Mic+ uses offline voice recognition which means less data usage and faster results.
CHANGE YOUR HOT PHRASE
With Open Mic+ you aren’t limited to “Okay Google”. Live out your sci-fi fantasies, support your favorite team, and just feel awesome with complete control over your phone.
WHAT’S DIFFERENT IN THE DONATE VERSION
Hi, my name is Ryan Senanayake and I’m a Junior still in high school. As the amount of time I have spent on this project grows to more than 1000 hours, I need to better justify the time I spend on development. The Free version will in no way be hobbled and will continue to receive bug fixes + performance/battery improvements, but from now on, new features will be added to the Donate version. It will only cost $2 and if you are not able to spend this, by simply sharing to two social media sites, you can receive a free donate version.
By downloading this app you agree to the privacy policy linked below
Open Mic+ is in active development, a low market review doesn’t help! Please press the support button in-app.
Developer: Ryan Senanayake
Design/Graphics Assistance: Adriano Loiacono
Translators: Paulo Calvo (Legacy Spanish), David Margolin (Legacy Spanish), Christian Meyer (German), Chiko Del Maiz (French), Y. Demers (French), ASHURiCAN iDe (French), Ján Kucera (Slovak), Billy Zhu (Chinese), John Larsson (Swedish), Mohamed H. (Arabic), Adriano Loiacono (Italian), Arthur Tretuhin (Russian), Julijan Nikolic (Serbian), Mehmet Can Ekinci (Turkish), Gert-Jan Anema (Dutch), Maxim van Loo (Dutch), Soedhier Bansidhar (Dutch), Jorim Tielemans (Dutch), and Jaakko Salminen (Finnish)