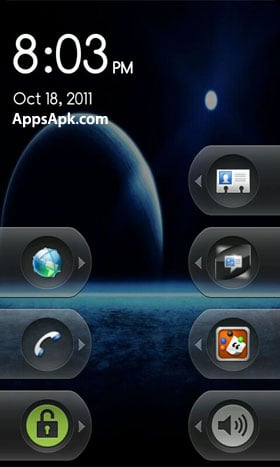 Launch apps and shortcuts directly from your lock screen!
Make your phone work for you – Replace your Android lockscreen with LockMenu.
This upgrade has some new features on the look of your LockMenu (e.g. a new slider style), performance improvements and minor bug fixes.
Note – We DO NOT (and never have) collected any information from your phone other than application bug/force close reports from Google/BugSense. All installation requested privileges are used by some feature of the application (e.g direct dialing, allowing you to turn on/off your GPS/wifi/airplane mode,…). We DO NOT collect your email, contacts, phone number…

Lock Menu is a replacement lock screen that gives you the ability to launch applications and shortcuts directly from your lock screen. Lock Menu gives you the ability to customize 7 individual sliders so you can build a lock screen that fits your needs.
Launch an application, direct text, or direct dial all from your lock screen.
No need to unlock your phone and navigate to your Home app, just to launch another application. Lock Menu allows you to access the tasks you perform regularly on the first screen that appears.
This version is supported by ads. The ad free version may be found at Lockmenu Pro. Other than removing the ads there are no other differences between Lockmenu Pro (paid) and Lockmenu (ad supported).
LockMenu Features Include:
– Configure up to 9 sliders
– Launch applications or shortcuts from sliders
– Launch direct dial or direct text from sliders
– Go to Home screen from sliders
– Configure whether each slider unlocks device
– Wallpaper or custom background
– Easy access to phone controls (wifi, bluetooth, airplane mode)
– LockMenu Pro – Ad Free version released.