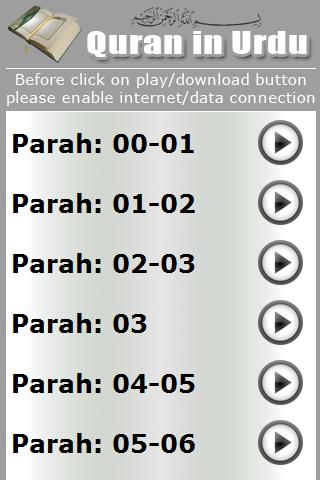 Listen Urdu Quran on your Mobile Phones.
The Quran is composed of verses (Ayat) that make up 114 chapters (suras) of unequal length which are classified either as Meccan  or Medinan depending upon the place and time of their claimed revelation. Muslims believe the Quran to be verbally revealed through angel Jibril (Gabriel) from God to Muhammad gradually over a period of approximately 23 years beginning on 22nd December 609 CE, when Muhammad was 40, and concluding in 632 CE, the year of his death.

Shortly after Muhammad’s death the Quran was compiled into a single book by order of the first Caliph Abu Bakr and at the suggestion of his future successor Umar. Hafsa, Muhammad’s widow and Caliph Umar’s daughter, was entrusted with that Quranic text after the second Caliph Umar died. When the third Caliph Uthman began noticing slight differences in pronunciation of the Qur’anic Arabic by those whose dialect was not that of the Quraish, he sought Hafsa’s permission to use her text and commissioned a committee to produce a standard copy of the text of Qur’an to which added diacritical marks ensured correct pronunciation, and to be set as the standard dialect, the Quraish dialect, now known as Fus’ha (Modern Standard Arabic) (see Origin and development of the Qur’an). Five of these original Qur’ans (Mus’haf) were sent to the major Muslim cities of the era, with Uthman keeping one for his own use in Medina. Any variations to standardized text were invalidated and ordered to be destroyed, all other versions of the Qur’an copied by scribes subsequently were from this codex. This process of formalization is known as the “Uthmanic recension”. The present form of the Quran text is accepted by most scholars as the original version compiled by Abu Bakr.

Muslims regard the Quran as the main miracle of Muhammad, the proof of his prophethood and the culmination of a series of divine messages that started with the messages revealed to Adam, regarded in Islam as the first prophet, and continued with the Suhuf Ibrahim (Scrolls of Abraham), the Tawrat (Torah or Pentateuch) of Moses, the Zabur (Tehillim or Book of Psalms) of David, and the Injil (Gospel) of Jesus. The Quran assumes familiarity with major narratives recounted in Jewish and Christian scriptures, summarizing some, dwelling at length on others and in some cases presenting alternative accounts and interpretations of events. The Quran describes itself as a book of guidance, sometimes offering detailed accounts of specific historical events, and often emphasizing the moral significance of an event over its narrative sequence.