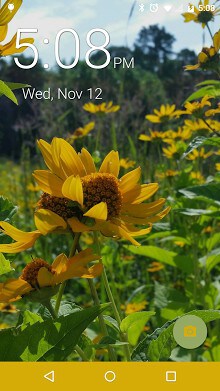 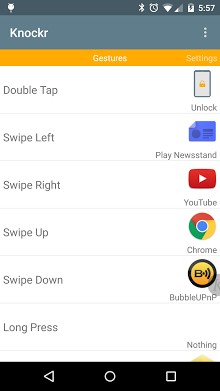 Knockr gives you quick access to your favorite apps with Gestures or Knocks (Knock Code) from anywhere.
The lock screen feature of Knockr is designed for all devices and will listen for Gestures or Knocks. Lock screen utilizes the palette class to pull colors from your background and apply them to the camera button and the nav bar (Lollipop only). On Android Lollipop devices you can control media right from the lock screen. The lock screen will also take on the colors of the Album artwork.
To launch apps with Knockr’ Gestures or Knocks from anywhere you can use Knockr Everywhere. Tapping on the small Knockr button will launch the Gesture/Knock listener. Long pressing or double tapping the Knockr button will lock the screen.
Knockr on OLED devices can mimic the screen being turned off while still listening for Gestures or Knocks, with black screen. Tasker Integration gives you even more control of Knockr Black Screen. Use Tasker to set the parameters you want for Knockr Black Screen to open/pause. The three options you can choose for Tasker to control are on, off and toggle. On launches Knockr. Off closes Knockr completely. Toggle option toggles Knockr sleep (release and reset the screen wake) the same way that the ‘Power Management’ option does. When using Tasker integration it is recommended to switch Knockr off in the settings and uncheck power management if using the toggle feature.
Gestures include:
Double Tap, Swipe Up, Swipe Down, Swipe Left, Swipe Right, Long Press, Up Arrow, Double Up Arrow, Down Arrow, Double Down Arrow, Right Arrow, Left Arrow, Clockwise circle, Double Clockwise Circle, Counter-Clockwise Circle, and Double Counter-Clockwise Circle.
Knocks are limited to 3 unless a donation is made and then they are unlimited.
Volume Up button when in Landscape: Pressing the volume up button when the device is in Landscape will automatically open the camera

Known issues:
Power button doesn’t turn screen on as expected (The power button isn’t possible to be overridden in Android, so there is no way to fix this).
Lockscreen Background doesn’t show correctly when using the Google Now Launcher (Lockscreen Mode. The wallpaper aligns to the third page of the launcher. This seems to be a vestige from the old android launcher).
Notification LED doesn’t show when using black screen (This happens because the screen isn’t turned off fully).