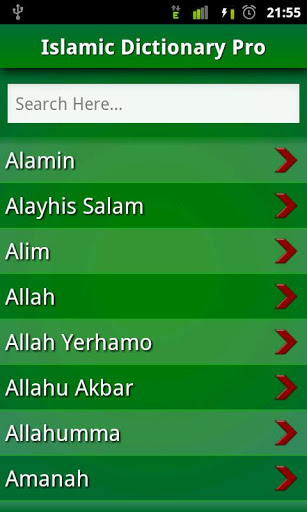 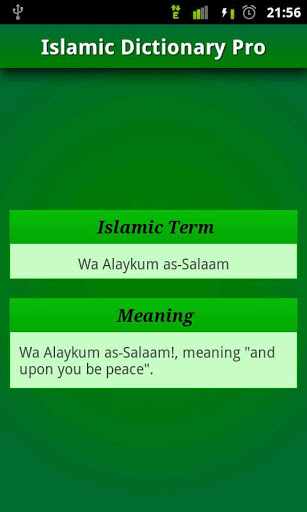 Completely offline & FREE Islamic dictionary app collection of 1000’s of Islamic terms and their meanings, used commonly by the Muslim community!!!
Islamic Dictionary Pro FREE, is a word search engine, to find the meaning or definition for any Islam-related words like, Islam, Allah, Sunnah, Quran, Alhamdulillah, Qibla, Dua. Learn what is the meaning of each of these Muslim terms. Find all the arabic words meanings used vastly by Muslims. Here is a small Muslim dictionary with meanings for some common Arabic terms also. We felt the need for a dictionary of Islamic terms due to a friend of ours, who was writing an English books on Islam to introduce the Islamic religion to non-Muslims.
Islam is a monotheistic religion characterized by the acceptance of the doctrine of submission to God and to Muhammad as the chief and last prophet of God. A comprehensive directory of Arabic dictionary meanings, terms listings and glossary that contain Muslim religious terms and terminology. A cyclopedia explanations of terms, doctrines, and customs of Islamic people. Finder of the Arabic words commonly associated with Islam. View Words by Letter in this Muslim Dictionary of Islamic Terms. Quran-ic/Islamic terminology lists which can be used on a daily basis and help us understand the Muslim scriptures and Islam as such, to improve Islamic knowledge.
Few common Islamic terms & meanings from this FREE Islamic Muslim Dictionary Pro app:
. Adhan / Athan – Call to salat (prayer), sometimes alternatively spelled and pronounced Azan, Athan and Adhan.
. Sunnah – The “path” or “example” of the Prophet Muhammad, i.e., what the Prophet did or said or agreed to during his life is Sunnah. He is considered by Muslims to be the best human moral example, the best man to follow.
. Abd – Abd means servant, worshipper, slave.
. Dua – Personal prayer, supplication, is called as Dua.
. Salah / Salaah – Any one of the daily five obligatory prayers are called Salah / Salaah in Islam. Sunnis regard this as the second Pillar of Islam.
. Dawah – Dawah is the call to Islam, proselytizing.
. Shia / Shiah – A branch of Islam who believe in Imam Ali and his sons (Hassan and Hussayn) as custodians of Islam by the will of the Prophet Mohammed, are Shia / Shiah.
. Qibla – Qibla is the direction Muslims face during prayer.
. Salat / Salaat – Prayer for guidance is done in conjunction with two rakaahs of supererogatory prayer are said Salat / Salaat.
. Sunni muslim – The largest denomination of Islam are Sunni Muslims. The word Sunni comes from the word Sunnah (Arabic: ???), which means the words and actions or example of the Islamic Prophet Muhammad.
NOTE: Spellings of Islamic Terms may vary, when translated in English.
Find basic Islamic terms & meanings in our new Islamic dictionary app book. Complete Muslim guide of essential expressions for every Muslim to remember. Few of Arabic translations of words & phrases are in this Islamic knowledge provider dictionary app. Great Islamic dictionary app to know common terms used during Muslim talks. Best of all Islamic tools to learn of the religion.
App Features – Islamic Dictionary Pro FREE:
– Completely Offline. Works without internet connection after install!
– FREE Islamic dictionary app!! No cost required to read through this app.
– Several 1000s of muslim Islamic terms commonly used during Muslim talks.
– Search box provided for quick find of Islamic terms in this library of Islamic dictionary.
– Soothing colors & layout with smallest app size!
We tried our best to provide most accurate Islamic dictionary meanings in smallest possible size for android, for all Muslims and non-Muslims alike, in hope to spread the knowledge of Islam & Allahu Akbar. For any questions / answers, please email us.
This Islamic pro app is totally Offline and FREE!! It is an Ad-supported version. Support the developer/finder of these apps with your positive comments & good ratings, for more of FREE pro Islamic apps, on demand. Thanks in advance!