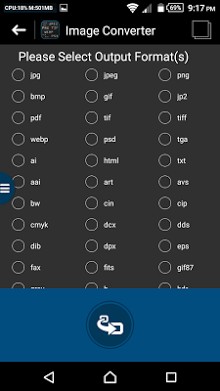 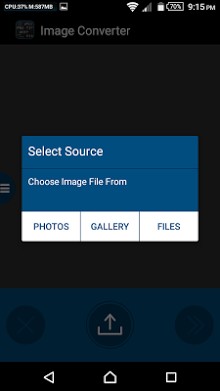 Image Converter is your number one app for converting image file formats on your device.
features include:
-Image Re-sizing
-Multiple File Processing
-Save as multiple formats
-Image Cropping
-Image Rotation
All operations are done offline and on your device, none of your images will be uploaded to any servers.

Image Converter has an easy to use file browser and Interface where you can access all your files/images and can access images from your photo library and can receive files from other apps such as Email attachments.

All converted Images are accessible within the app and can be automatically saved in your photo library if they are of any of these file formats :
jpg, jpeg, png, bmp, gif, (webp Android 4.0+)

Within the App, you can share any of the converted images via other apps like email and social media
Your original Image files will be left intact and untouched.

Requires Android : 3.0 and up
Offered By : Paul Asiimwe