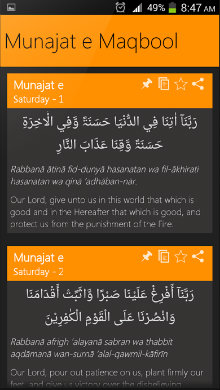 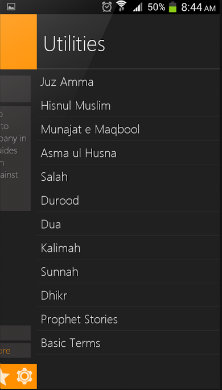 Hadith.do App for Android is the collection of Hadith of Prophet Muhammad (محمد (صلى الله عليه و سلم (Peace Be Upon Him). The app contains 39000+ hadith from most accepted and authentic Hadith books

This app is feature rich, some of them are as below:
1) Sharing: Sharing facility is available for each hadith from any book or kalimah, sunnah etc…Thus, there is nothing in this app which cant be shared with others.
2) Starred(Favorite): Every thing in this app can be starred and can then be easily accessible from home screen.
3) Search Facility: Search facility is provided on the home screen, and by entering search keyword resulting hadith containing that key word will be displayed on screen.
4) Mordern UI: App has modern UI features like sliding menus.
5) Daily Alerts: App provided facility of daily hadith alerts.
6) Search Settings: Changes how search works.
7) Pins: Now all contents in this app can be pinned and can then be easily opened again from main screen. This feature act similar to bookmarks.
8) Copy: All Content of this app can be copied and can then be pasted any where as per users choice facebook, watsapp etc.
9) Fonts: Font can be changed as per choice provided in the app. User can now change size aswell as type of font used in the app.

This is ad supported free version of Hadith.do,If interested you can download ad free Hadith.do Pro version available on Playstore.