Home » All Apps » Graffiti for Android 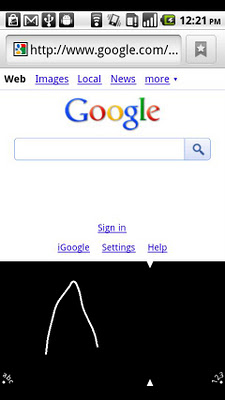 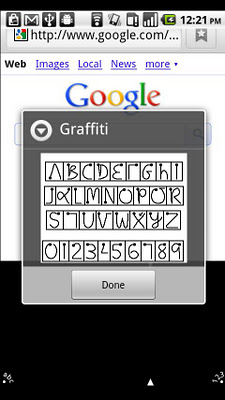 Download Graffiti™ – The Keyboard Replacement for Android that uses the stroke-based handwriting recognition system text input system made popular by Palm™ PDAs running PalmOS™.
Features:
-Replaces the Default Keyboard for Android
-Stroke-based text input – Uses the Graffiti alphabet text input method
-Easy to Learn
-Speeds up text input with Auto-Capitalization and Word Learning
-English and Japanese language support
-Faster and More Accurate that On-Screen Typing
-Advertisement Free upgrade available with Graffiti™ Pro.
Graffiti™ is a replacement for the built-in on-screen keyboard, also called an input method. With Graffiti, you no longer type but you draw Graffiti characters with your finger or a compatible stylus. Graffiti characters are mostly single-stroke drawings that closely match the usual alphabet, but are simplified to make entry faster and easier. For example, the letter “A” is entered with a stroke that looks like an upside-down “V”, saving time that you do not need to cross the “A” in the middle. Same for the letter “T”, which is entered almost like a “7”.
There are text and numeric input areas, improving the recognition of your input. Strokes drawn in the text area will only be interpreted as letters; strokes in the numeric area will be interpreted as numbers.
If you were a user of a PalmOS based PDA in the past, this will all be very familiar to you as the input method used by those devices was a stylus drawing Graffiti strokes in an input area at the bottom of the display. But even if you were not a Graffiti user before, you should give it a try now if you find that the on-screen keyboard doesn’t suit your input style.
Don’t know the Graffiti alphabet? After installing and enabling Graffiti, just draw a stroke up from the Graffiti input area into the main display area and the help screen appears. Tap to switch between the six stroke help screens.