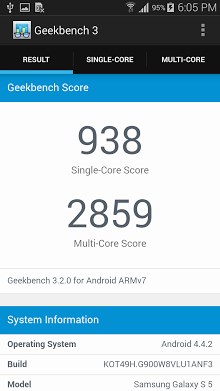 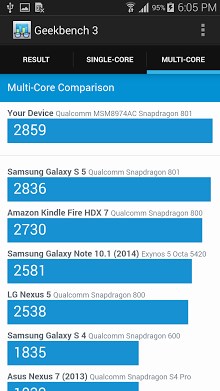 Find out how fast your Android device is with Geekbench 3, the popular cross-platform benchmark.
Geekbench 3 includes several new tests designed to simulate real-world scenarios. These new tests are designed to quickly and accurately measure mobile processor performance.
Every test included with Geekbench 3 is multi-core aware. This allows Geekbench 3 to measure the full potential of your device’s processor. Geekbench 3 also reports performance as separate single-core and multi-core scores, making it easier to figure out how your device will handle your apps.

The New Geekbench 3 is now including 15 new benchmarks, which are building to real-world based tasks. The new Benchmark tests cover various types’ of application domains, including encryption, image processing, signal processing, and physics simulation.

Just like the other similar applications, Geekbench sneers at fashion and wears its sparse starting page like a hoodie at a shareholder’s meeting. You just get to start the progress bar, and it will make the way across the mobile screen slowly from zero to 100. When you are done with everything, you will examine the in-depth tables, which consist of the results about the speed of your device CPU and memory systems.

You will see the results are broken down into Integer, Floating Point, and Memory sections along with the device rankings for single and multi-core results. Geekbench 3 is providing is enough details for the user’s satisfaction. Hence Geekbench 3 the best for CPU testing and it is much handy mix.

If the users are unaware of the advantages of the latest multi-core processors, they can implement the new single-core scores to find the fastest machine for their tasks.

Geekbench 3 is built on JSON as its native file format. JSON is known as a lightweight format, which is based on JavaScript. JSON is extremely easy for the system to interpret the test easily, as well as for users to read and communicate.

Geekbench 3 also loaded with lots of guides and information about each benchmark test in its file format, hence, it is allowing users to dig deeper into their benchmark results.