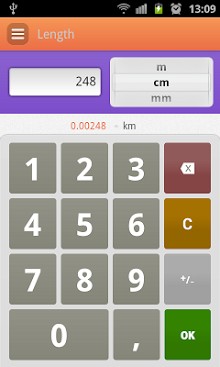 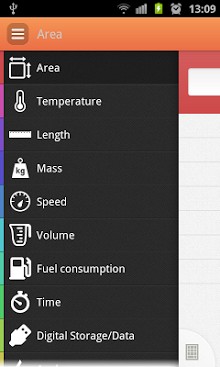 – Searching for unit converter free download? Search no more! This is one of those “tool apps” that features unit conversion calculator. Convert as a real PRO!
– Conversion of units is the conversion between different units of measurement for the same quantity, typically through multiplicative conversion factors. There are many different unit converters available for you, but this one has multiple advantages.
•    Eye-appealing graphics
•    Well-designed conversion chart
•    User-friendly interface
•    Moveable to SD card
•    Round-based on decimal places
•    Commonly used abbreviations for units such as cm for centimeters, km for kilometer, in for inches etc.
•    Both Imperial and Metric conversion
Another great feature of this converter is that it is not overwhelmed with thousand different unit categories but it actually contains those most commonly used ones. If you want to convert feet to meters, you can do that quite easily without too much searching for the length converter category. This toolbox has 14 different categories including length, mass (weight converter), volume and area as the most popular ones that you can use to convert Celsius to Fahrenheit or to check how many pounds there are in 33 kilograms.
Other categories here are Speed, Fuel consumption and Time Converter that go hand in hand and are excellent when on road trip. Angle, power, pressure and force converter are put in this app for the more advanced converters, such as physics students or other scientist who got tired of manual calculators. Digital Storage or data and Digital Imaging categories are cool extras.
If you think there is an important unit category missing from this app, please inform us ASAP!

Things you didn’t know :
The system of imperial units or the imperial system is the system of units first defined in the British Weights and Measures Act of 1824, which was later refined and reduced. The system came into official use across the British Empire.
The metric system is an internationally agreed decimal system of measurement that was originally based on the mètre and the kilogramme introduced by France in 1799. Over the years, the definitions of the metre and kilogram have been refined and the metric system has been extended to incorporate many more units. The term is now often used as a synonym for “SI” or the “International System of Units”—the official system of measurement in almost every country in the world.