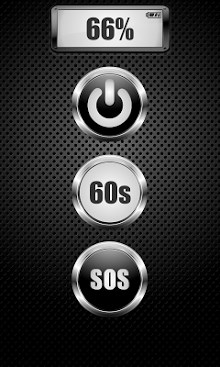 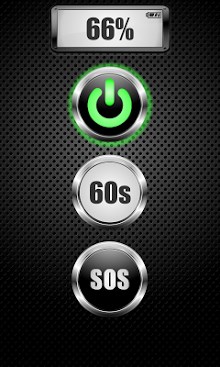 Flashlight LED is the flashlight in your pocket, when you need it, where you need it.
Flashlight LED uses your Android’s camera LED (flash) to turn your Android into flashlight. With Flashlight LED you can turn ON/OFF your camera LED and use your device as flashlight, send SOS signal in case of emergency… Flashlight LED uses the camera LED at maximum power, making it the brightest flashlight available for your device.
Flashlight LED has the following functions:
–    ON/OFF
–    60 seconds (flashlight is on for 60 seconds)
–    SOS (international emergency signal)
Other features:
–    Simple to use, it only takes a click to turn it ON
–    Professional dark design to save battery
–    Professional coding to keep application size as small as possible, less than 1 MB, much smaller as competitive apps on the market
–    Audio Effects on pressing buttons
–    Integrated battery meter will tell you exactly how much battery you have left
–    NO unneeded features no use uses – just the important stuff 🙂
–    It’s FREE 🙂

Flashlight LED works with the widest range of devices with camera LED. In case your device does not have camera LED, you will not be able to use this app.