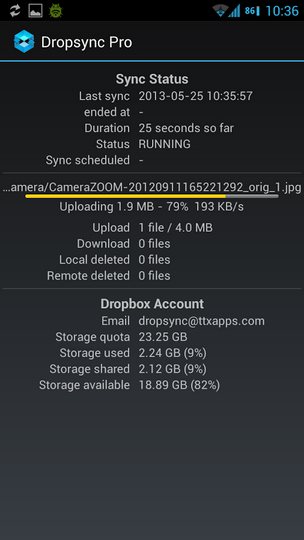 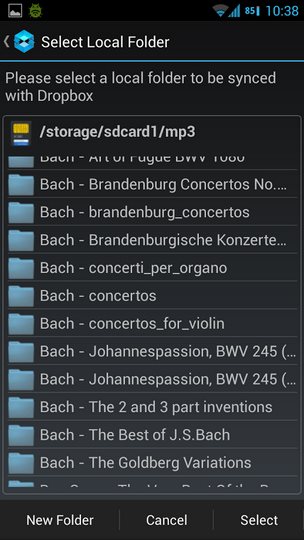 Keep your phone/tablet and your Dropbox in sync at all times. Rock-solid, battery efficient, full two-way(!) sync client for Dropbox.
“Just like the desktop version of Dropbox, Dropsync supports true two-way data synchronization.” –New York Times
“Take a picture on your phone and watch as it’s already waiting for you on your laptop when you get home.” –phandroid .com
“I bought 5 other apps like this one, but this is the only one that didn’t crash while synchronizing my large Photo & Video folder” –Dropsync user
“Must have app. Now my phone – computer – tablet are one!” –Dropsync user

FEATURES INCLUDE
. Full two-way sync. Just like Dropbox on desktop
. Instant upload: new files (for example photos) are uploaded to Dropbox immediately
. Very efficient, consumes almost no battery if there is no change detected and will not slow down your phone either
. Very easy to set up. Once set up files will be kept in sync without any effort from users
. Works reliably under ever changing network conditions on your phone
. Monitors battery level, WiFi/3G/4G/WiMax connectivity and adapts its behavior according to user preferences
. Configurable autosync interval: 15 minutes, 30 minutes, every hour,…
. Tasker/Locale plugin to allow power users to define sophisticated sync schedules and conditions
. Many sync modes. Not only two-way, you can also choose Upload only, Upload then delete, Download only, Download mirror,…
. Compact code size, memory efficient, no fancy graphics, no useless animation. We have enough bloatware. Do one thing and do it best
Beware that there are many apps out there on the Market which claim doing sync but in fact what they do is one-way dumb upload or download.
Dropsync provides the essential feature, two-way sync, which should be in the official Dropbox for Android since the beginning. For whatever reason it wasn’t and still isn’t. Now you have it.
If you are a serious Dropbox user and want more flexibility, please consider upgrading to PRO version.

PRO FEATURES INCLUDE
. Sync multiple folders
. Sync the whole Dropbox with a folder on your phone or tablet
. Upload large files, from 10 MB to several GB
. Smart Change Detection. Super fast method to determine file changes that need to be synced
. No ads