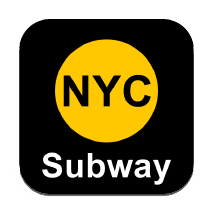 New York City – The dream city for many! While it is the perfect city in many aspects, getting around is a nightmare. However, their reliable transport system is there to make things easier for us. Once you get on the transport system, you can reach any corner of New York City with ease. The tricky part is to get your hands on the subway maps and transport schedule details. In this digital age, it would be astonishing if there were no apps for that! In this article, we will see the five best NYC Subway Map Apps For Android.

Hopefully, this will give you some insight into which one suits your needs better and some a glimpse into the features offered by each of these apps. Did you know that there are apps that even share the bike share stations nearby! That’s amazing! Read to know the best NYC Subway Map Apps.

Over here is the list of Best NYC Subway Map Apps

Citymapper is such a great app that it has even won awards for its design and functionality. It is an excellent Android app and does it work perfectly. Besides the subway, Citymapper offers details about bus and train routes as well. If you are in a rush, the app will tell you the quickest route to the destination – not only via the subway, but also by using other services, such as taxi, ferry, bike share, or even walking!

All details offered are in real-time, so you will always be in the loop if any service is delayed or changed. A GPS locator will tell you the nearest station. The best part about Citymapper is the fact that it does not include only MTA commuter lines, but also offers information about others, such as NJ Transit and PATH. The app has been designed to offer new routes based on the weather. For instance, if it is raining, you would not be advised to walk, instead details on subway, bus, or cabs would be shown. It can be accessed offline.

This app is completely free for use and can be accessed by Android, iPhone, and iPad devices. One can even use it via Apple Watch! While the interface if not as easy to use CityMapper’s, it is still good enough. One major advantage of the NEW YORK SUBWAY MAP & ROUTE PLANNER app is that it works offline as well. With their user-friendly route planner, you can plan your journey in seconds. 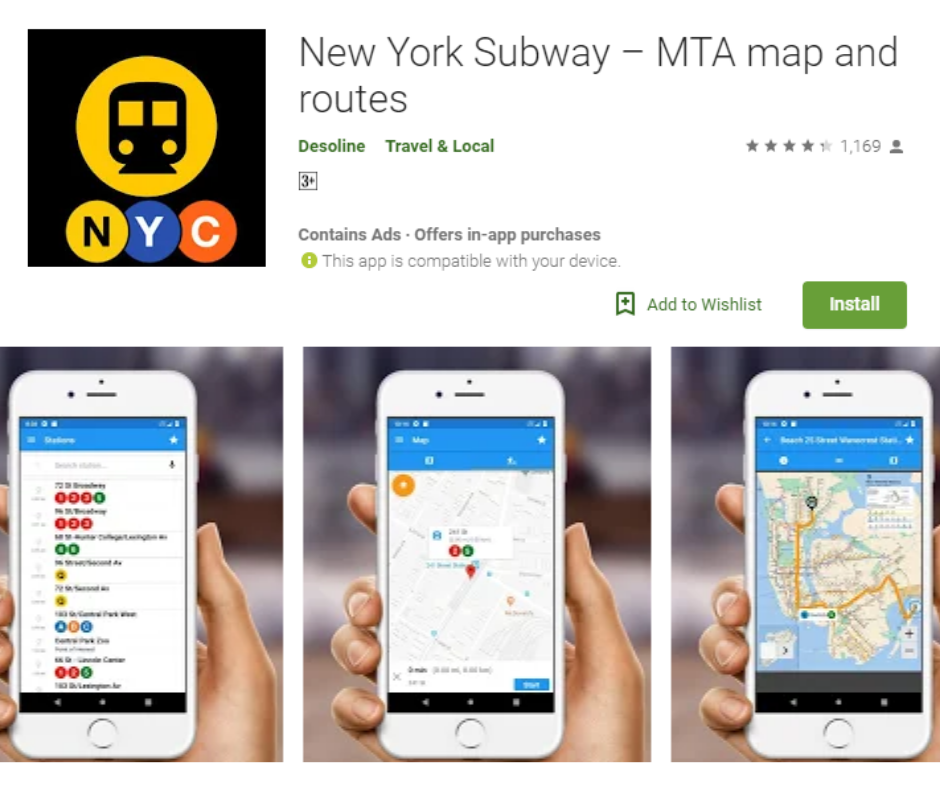 Since it uses the official MTA map of the NYC Subway, you can be sure that you are being given the right directions and the most optimal ones. The app also provides service status details regarding any changes of platform or any delays. These notifications are sent directly to the user’s phones. If you are new to the city or that particular area and you don’t know which station is the nearest, this app is here to help you out. Uber services are integrated with the app so you can book a taxi according to your journey timings.

Transit is a popular app among users. Its accurate real-time information of arrivals and departures has made it an invaluable addition to everyone’s smartphones. It offers point to point navigation, user-friendly trip planning, service disruption notifications, and more. If you want to take a short nap, go ahead. Set the app to send you a notification when your stop is about to come! You would also be able to download schedules and use it offline. 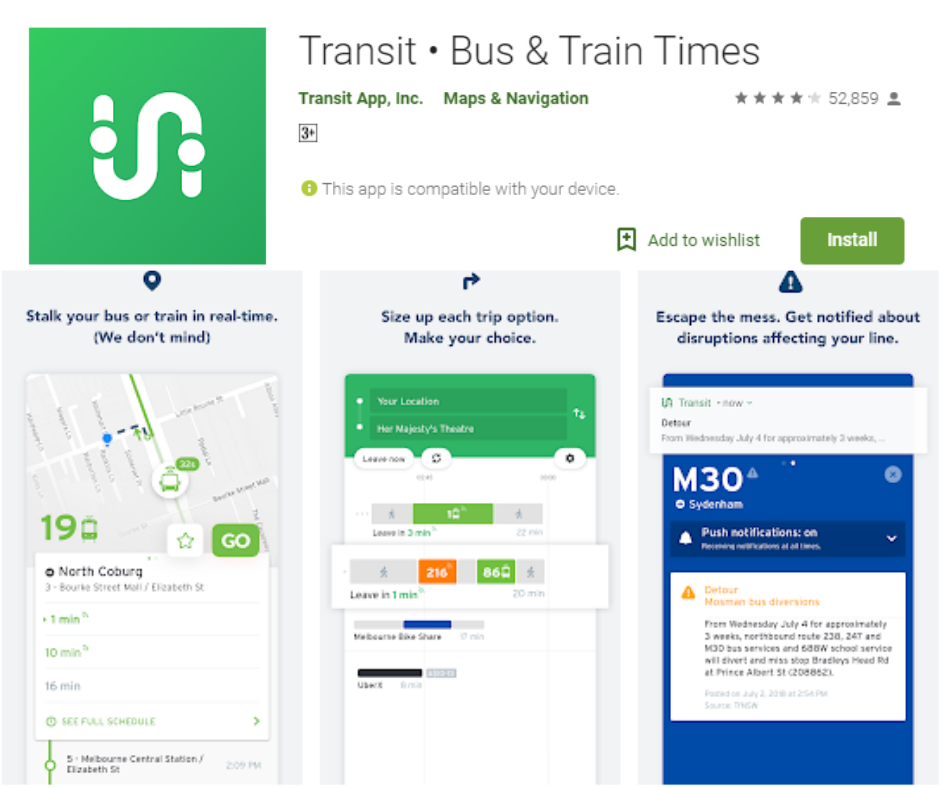 The app has a clean and neat interface, making it very easy and handy to use. Besides the Subway, the app also shows details about other forms of transport, such as the ferry, Citi Bike, Uber, and trains. Transit allows the users to customize their journey to get the best out of it. You can also unselect some forms of transport so that it will not be part of the options.

Exit Strategy is one amazing app. While other apps usually offer details about arrivals, departure, and delay notification, Exit Strategy goes one step further to tell you which platform, exactly where in that platform, and the best car to get into. If you want to get out from Avenue A in Station B, the second last car would be recommended as the best one for your trip. Since most subway stations have multiple exits, getting out of the wrong one could delay you. 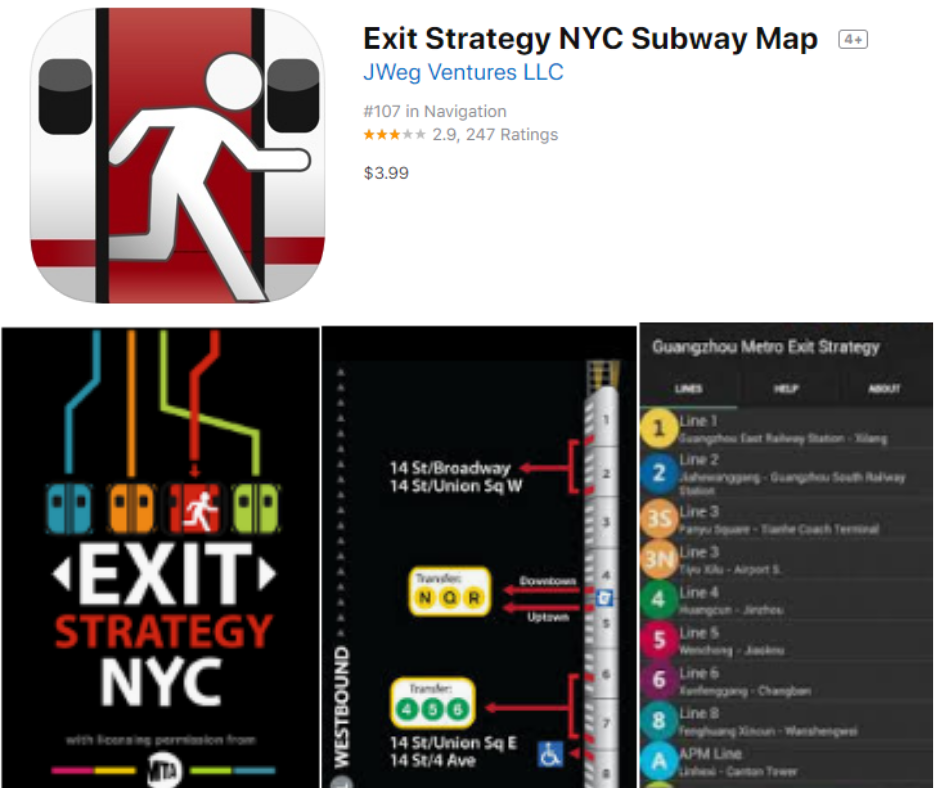 The free, lite Android version offers details online about the Subway station. The paid iOS version offers additional features. The fact that Exit Strategy works just as well underground is a point in its favor. The exit locations for every one of the 469 subway stops are shown in this app, making your life so much easier! The interactive MTA subway app and street maps help you plan your journey down to the exact point.

Moovit is a free transit map for NYC and can be accessed by both Android and iPhone users. Its clean interface makes using it a nice experience. It offers real-time schedule, accurate arrival and departure details, and more. Moovit suggests data for several modes of transport, in addition to the subway, like commuter rail and bus. 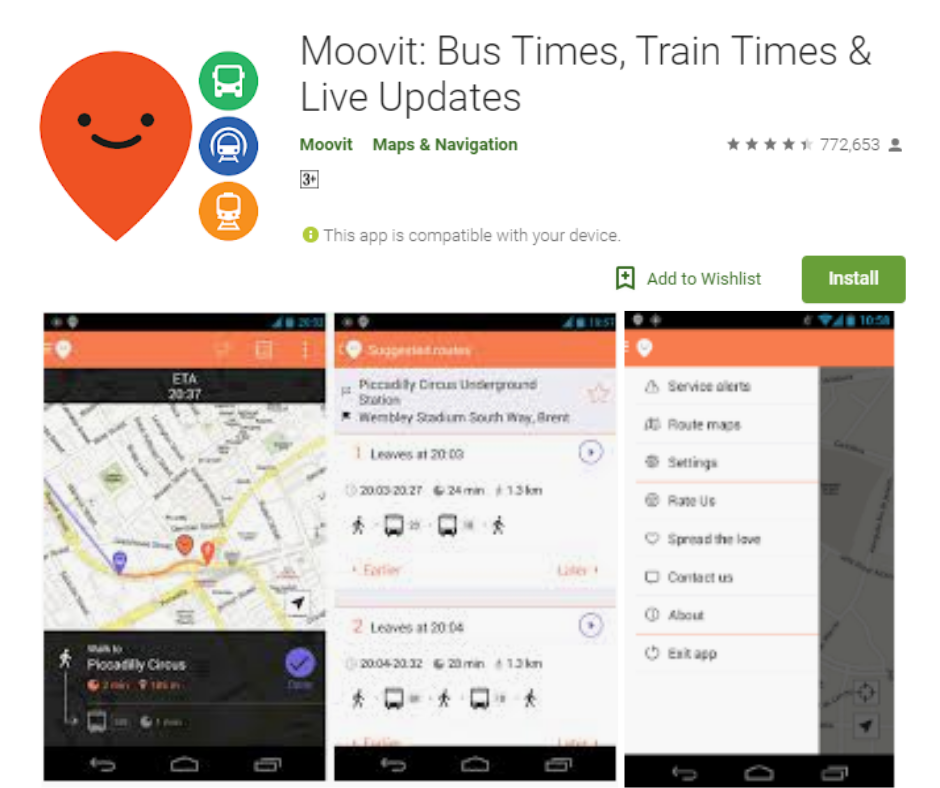 What makes Moovit stand out is the fact that it has partnered with Be My Eyes, an app that helps visually impaired users to commute easily. Blind users would now be able to commute just as comfortably and in new places. You will receive alerts when your station is nearing. Unfortunately, it doesn’t work well if you don’t have active cell coverage, which could be trouble underground.

Getting around in NYC seems to be no longer a trouble thanks to these amazing applications. Each one offers a ton of useful features and users can choose the one that suits them the best. Go on! Have fun going around the exciting New York City!