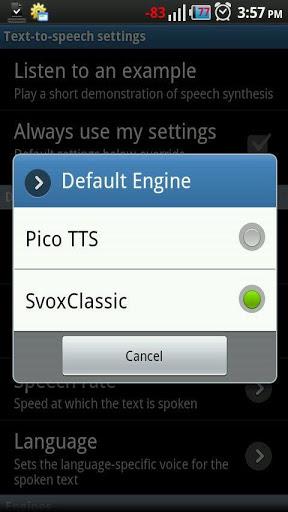 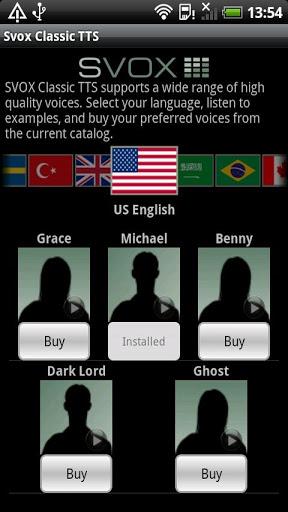 Did you know that your mobile can speak more than 25 languages?
*** Now with a 2 weeks FREE trial for all voices ! ***
Get the most natural sounding voices for messages, navigation directions, translations, and more.
Classic Text To Speech Engine from SVOX, in combination with our 40+ male/female voices portfolio of 25+ languages, allows you to read aloud texts from your e-book, navigation, translation and other apps.
When combined with TTS-enabled apps, our voices can:
– give directions, allowing you to keep your eyes on the road while you’re driving
– read a notification containing the caller / sender’s name, and read the content of an incoming call / sms / mms / email
– read aloud your favorite e-books or pdf documents
– help you learn by reading aloud the correct pronunciation
and much more… the possibilities are limitless!

NEW! Pronunciation correction feature: correct the default output according to your preferences!
The free Classic Text To Speech Engine installs a full fledged TTS engine to your Android and comes with demo mp3’s for 40+ voices.
Voice packages can be tried out for 2 weeks FOR FREE, or purchased separately.
Our voices are great with Google Navigation (on Android 2.2 and later), Moon+ Reader PRO, Voice Actions Plus, TalkToMe Classic, Book Speech Audio Books, Transzilla, Good Morning, WakeVoice…

== INSTRUCTIONS ==
After installing Svox Classic TTS, enable it as follows:
1. Go to Android Settings -> Voice Input & Output -> Text-to-Speech settings.
2. Activate SvoxClassic at the bottom of the screen, then select SvoxClassic as the Default Engine.
3. Open Svox Classic TTS app to browse the voice catalog and download a trial/full voice for your language.
== NOTES ==
1. Google Navigation requires that the Text-to-Speech voice matches the phone language. You can change the phone language in Android Settings -> Language & keyboard -> Select language.
2. On Android 2.1 and earlier, only some apps, like Google Translation, support changing voices.