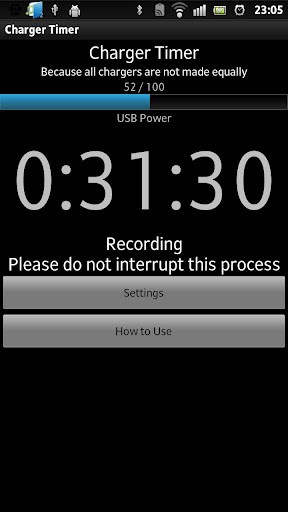 v2 now released. Added configuration options, rotation and, most importantly, no more auto exiting on interruption.
Have you ever noticed that some chargers charge your phone faster than others? Ever wondered which charger is the best? How your mains charger compares to your car charger? I know I have.
This app is designed to give hard numbers to just how effective a charger (and cable) are. No more guessing, no more assuming if the power rating on that cheap imported charger is just for show.
Xperia users, ever wondered what the differences between the EP800 and EP850 are?
I hope to profile as many chargers and cables as I can to come up with the ultimate combination to charge a phone as fast as possible.

[spoiler] After performing a series of tests I have observed that the cable you use us as important as the charger. I got over double the performance using a dedicated charge cable as opposed to a normal USB cable on a HTC B250. [/spoiler] So how does it work?
Its quite simple. Use your phone normally until the battery level is below 20%. Run this app then plug your phone in to charge. Leave it until it has charged and look at the results.

Why 20% to 80%?
Getting the remaining charge in a battery is not as exact as you would like to believe. I have noticed, especially at low levels, that the reading can be as much as 5% out. I have also observed that many phones have a behaviour built into them so that when they reach 90% charge they slow down the charge process to help protect the battery. With this in mind, I am using the relatively stable 20 – 80% range to test how a charger behaves at maximum load.
How is charger power determined.
This is a bit of a guess. I have assumed that the phone being tested has a battery with a capacity if 1750mah (a Sony Xperia S), although as of 2.0 this value is configurable. I then work out how many hours it takes charge from 20 to 80%, and what percent of the battery this is. This gives a pretty accurate number. If your battery is different, the number may not match the charger, but it is still directly comparable to other tests against your phone (I think it will just consistently read high).