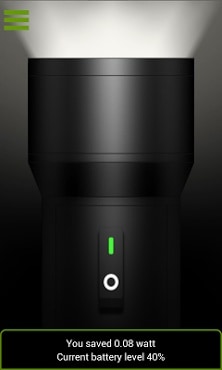 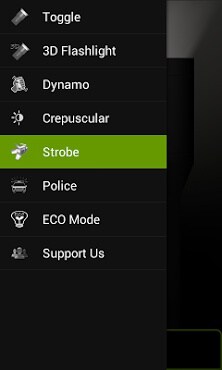 The fastest startup smart flashlight app with Smart Camera Flash Light LED technology for your Android device.
Easy to use: interfaces have been designed with great attention to user experience to make them user friendly.
Powerful and bright: the use of the flash of the camera allows the issuance of a powerful LED light extremely bright, and for the most demanding 3D mode Flashlight doubles the amount of light emitted through the use of the screen for an experience of use engaging.
Smart: using your smartphone’s sensors in an intelligent way the battery usage is minimized and activating the ECO mode reduces the consumption yet!
Versatile: even devices with no camera or flash can use this torch light as it will automatically activate the compatibility mode that will use as a source of light the screen of your Android device.

According to sensors on your Android device flashlight will be used in several ways:
– Flashlight 3D: let wrap by the light from the camera flash and the screen! (this mode is unlocked after a few days of use)
– Smart Camera Flash Light LED : low battery consumption due to optimized algorithms for energy saving
– Flashlight Shake to Shuffle: shaking your device, provide energy to the battery of LEDs that allow the lighting of the torch light
– Smart Light: the flashlight turn on automatically based on the intensity of light that surrounds you
– Strobe Light: Have fun with your friends as if you were in the nightclub
– Police Screen: fun to simulate turning on the flashing police
– Screen Light: simple but functional, a nice bright light emitted by the screen

Simply the best flashlight app on the Android marketplace.