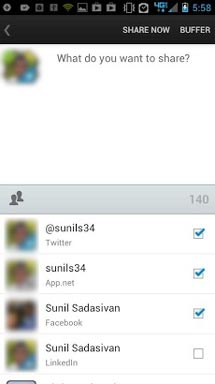 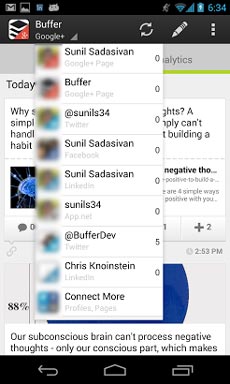 Buffer is the best way to share on Twitter, Facebook, Google+, LinkedIn and App.net from one place.
It work from news apps like Flipboard, Zite, Taptu, TweetDeck, Evernote, Pocket, Instapaper, Pulse, Feedly, UberSocial, Plume, Seesmic, Google Currents and other Google Reader app. You also get Twitter analytics, Facebook analytics & LinkedIn stats.
OVERVIEW
When you find something to share, simply add it to your Buffer queue. Buffer will schedule tweets to Twitter, Facebook posts or LinkedIn updates spaced out over the day.
You will get the best results by sharing on Facebook and Twitter for Android. Different to normal news apps and social share apps, Buffer gives you Twitter analytics and Facebook insights with clicks, retweets, likes, comments and more. We’ll schedule Tweets and updates hassle free for you.
*SOCIAL APPS & NEWS READING APP INTEGRATIONS*
When you read an article, use Android’s Share menu and choose “Add to Buffer” to post to Facebook and Twitter for Android. The best free Twitter apps to use with Buffer:
-Twitter app (official)
-Tweetcaster (TweetCaster comes with direct Buffer integration)
-Tweetings (Tweetings comes with direct Buffer integration)
-TweetDeck: (Easily Buffer replies from TweetDeck though Buffer)
-Hootsuite
-Twidroyd
-UberSocial: Easily Buffer updates from UberSocial as retweets. UberSocial and Buffer are one of the most powerful combination tools)
-Twicca
-Plume (especially Plume’s great sharing menu)
-Seesmic (also checkout Seesmic’s other social integrations)
With Buffer you will get Twitter analytics through sharing. It’s the most efficient social sharing apps to post to facebook and Twitter.
Buffer works well to post to Facebook and Twitter from read later & news apps, most notably read later service Pocket & Instapaper, Zite, Hooha, Twicca, Plume, Flipboard, Pulse News, Google Currents, Taptu, Evernote, Feedly and more:
– Flipboard: Any article you read in Flipboard can be added to your Buffer via the share menu in the top right.
– Pulse News: Browse through top feeds in Pulse News and share efficiently by adding to your Buffer.
– Evernote: Everything you save to Evernote can easily be shared to Buffer.
– Feedly and gReader: The top Google Reader app Feedly and gReader let you share at the best time to Twitter and Facebook. Feedly also comes with direct Buffer integration on the iPhone and gReader soon.
-Google Currents, Zite and Taptu: These intelligent news readers let you add to Buffer and share intelligently at the same time, especially with Zite and Taptu.
– Instapaper & Pocket: Save articles to read later apps & improve your social networking by sharing effortlessly with Buffer from Pocket and Instapaper (This works also through Plume,Twicca, Seesmic , UberSocial, Tweetcaster, Twitdroyd).
FAQ
> Can you use Buffer to post to Facebook and Twitter with multiple accounts?
Yes. You can connect multiple social accounts. Just go to the accounts section and choose “connect account”. This is a great way to have a complimentary Twitter app, Facebook app or LinkedIn app.
> Can I use Buffer as my Facebook app or Twitter app for posting in China?
Yes, you can make Buffer part of your Facebook apps or Twitter apps that have access to your social accounts in China. We’ve received great feedback from our users in China.
> Can you schedule individual Twitter tweets and Facebook posts with Buffer like you can with other Twitter apps like Hootsuite & TweetDeck?
No, Buffer is different to normal scheduling like with other free Twitter Apps Hootsuite & TweetDeck. Unlike Hootsuite & TweetDeck, with Buffer you don’t need to select the date and time for every update. Just choose “add to Buffer” and you are set to have another update scheduled. Buffer is also directly integrated with Tweetcaster.