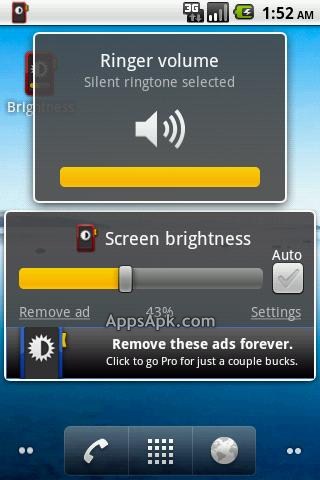 I guess I’m pretty sensitive to the brightness of my screen, and I’ve never been satisfied with the automatic brightness feature on either my laptop or my Android phone. It’s usually too bright at night and not bright enough during the day, and it can vary unpredictably as I move my hands around (probably because I’m covering the light sensor). My laptop has a keyboard button for changing brightness, which works great and I use it many times a day. My Android phone, though, doesn’t have a dedicated brightness button, so changing screen brightness is a multi-step effort that takes much longer than it should. So that’s why I invented Brightness Rocker.

At first I tried using a simple home-screen brightness widget, of which there are several on Android. They make changing the brightness as simple as 1-click when you’re at the home screen. But then I began to find myself in circumstances where I wanted to change the brightness more quickly. For example, when I wanted to show someone else a photo, I didn’t want to have to switch from my photo to the home screen, increase the brightness using the widget, and then find my photo again. So I thought I could make a better way.

I developed Brightness Rocker, an app that lets you change your screen brightness while in any app. All you have to do is push the volume rocker buttons on the side of your phone, and, in addition to changing the volume, a window appears with a brightness slider control (shown in the screenshot below). You can then swipe your finger to increase or decrease screen brightness, after which the window disappears. You never even need to leave your current app.

So with Brightness Rocker, changing brightness is no longer a hassle, no matter what you’re doing with your phone.

The app also includes a home-screen widget and notification icon for viewing and changing brightness. There are also a few settings you can tweak to fit your needs as well.