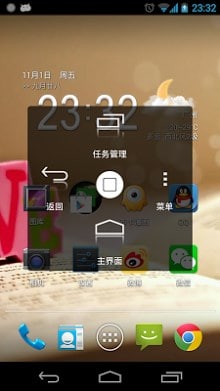 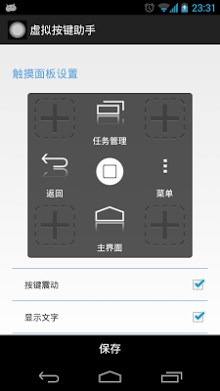 Assistive Touch(Two Years)
Description:
Assistive Touch is a copy of the IPHONE assistive touch application, failure of the cell phone for those buttons, this is absolutely an artifact level saviour and It is easy touch every key you want,Try to use ~
There are more and more Android phones, and many are using entity key, according to many, will naturally appear more or less problems, like the return key, power failure or sometimes completely unable to use, virtual buttons assistant can solve these problems, for your mobile phone provides a chance to reborn.
Function description:
1, Virtual system keys, such as the back, menu, power, home, search, tasks,etc;
2, Can be a key to open the system application;
3, Virtual point can freely control the size, transparency, animation, etc.
4, Low requirement to the mobile phone, memory and power consumption is small, some functions need root authority;
5, A key screenshots, convenient and quick.

Note:
1, Some functions need root authority;
2, If your device has a root, and still can’t use, please select the method two or three in the set;
3, New MIUI system and other users of the system in the set, please open the application of the required permissions, can in the desktop display window.

Historical development:
In July 2012, I had just quit my job, because it’s free, so with reference to the iphone’s virtual assistant to do a simple application,
Then the first version released in August 2012, then it will be published source code, source code download address: code.google.com/p/assistivetouch/

Maintains a period of time, back into the worker be in September, then how to manage, let its development, and a year later, found that quite many people in use,
But also quite many people left behind a message a lot of support, let me very touched, as an application developer, actually more power is your support.
So, in October 2013 will be released it on Google Play, and then slowly, the user is built up, in the user’s suggestion, the adaptation of traditional, English.
After is updated occasionally.
Now, I resigned in August 2014, in free time a week, a large number of reconstructed the virtual buttons assistant, make it more flexible and more quickly.
And tomorrow, I will be in again, so the record here.

Temporarily thought of so many, any Suggestions please email me!
About CodeBoy:
CodeBoy team is a team project in his spare time is devoted to the interest, the slogan is:do something different!
Now, only me.
Welcome advice, feedback problems.
Email: [email protected]