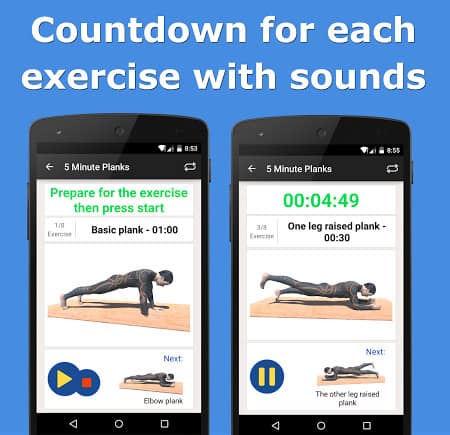 A very easy to use counter for the famous Five-Minute Plank exercise. You know what is the next position and when to change it.
The Five-Minute Plank uses relative inactivity to challenge the abdominal muscles and strengthen them. In five minutes you get to exercise as many parts as possible of the muscle wall. The result: strong abs, a strong core, more power, better coordination… plus you get to look good on the beach.

What it works: Abs, chest, glutes, lower back & core

Tip: To gain the maximum out of your time in this exercise, tense your abdominal muscle group at each rep.

Becoming and staying fit has never been easier with the help of 5 Minute Plank! It takes only 5 minutes in the morning or in the evening at home or at the office to be in a great shape!

The best part? The exercises are simple to perform, do not require any equipment, and therefore, can be done anywhere! NO MORE EXCUSES.

We are dedicated fitness professionals and app developers. We strive to make the highest quality products – if you have any suggestions, feel free to contact us. Our apps are regularly updated at no charge.

The plank (also called a front hold, hover, or abdominal bridge) is an isometric core strength exercise that involves maintaining a difficult position for extended periods of time. The most common plank is the front plank which is held in a push-up position with the body’s weight borne on forearms, elbows, and toes.

Many variations exist such as the side plank and the reverse plank.The plank is commonly practiced in pilates and yoga, and by those training forboxing and other sports.

The plank strengthens the abdominals, back, and shoulders. Muscles involved in the front plank include:

Primary: transversus abdominis muscle, gluteus medius and gluteus minimus muscles (abductors), the adductor muscles of the hip, and the external, and internal obliques.
Secondary: gluteus maximus (glutes), quadriceps (quads), and hamstrings.
The current world record (according to Guinness World Records) for the plank position is 3 hours, 7 minutes and 15 seconds set in Newport, Kentucky on 20 April 2013 by George Hood.On June 13, 2014 a Danish news paper reported that 51 year old fitness instructor Tom Hoel broke this record in Frederikssund by holding the plank position for 3 hours and 8 minutes.

On June 24, 2014 China Daily USA reported that George Hood maintained his body in the physically demanding plank position for four hours and one minute on June 23,2014 which broke the Guinness World Record for “longest time in an abdominal plank position”, smashing his own previous record of three hours and seven minutes set in 2013.