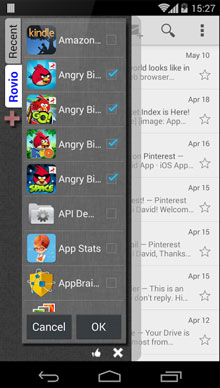 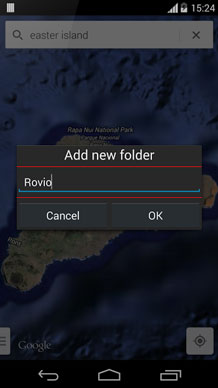 Launch apps from any screen, switch apps with multitasking.
Drawer Launcher provides a greate way to organize your apps you want to access quickly, without cluttering your home screen.
You are having more and more interested apps installed on your phone, but it takes longer and longer to find one and launch it.
You like playing Angry Birds, you install all Angry Birds series including Bad Piggies, but you cannot group all these games by the same producer in one folder and see them all at once.
Your home screens become more crowded.
You hate constantly pressing the BACK and HOME keys to switch between apps.
Enough. Drawer Launcher removes all these inconveniences, and gives you a faster, cleaner experience when launching your favorite apps.

FAQ
Can I reorder in-folder apps?
Yes. Tap and drag one app icon to a new spot to change its order.
You can also swipe app icons to delete apps from the folder.
How do I open Drawer Launcher and launch apps?
1. Swipe from the left side of any screen to right to bring up the Drawer Launcher.
2. Create an app folder and add some apps into it.
3. Tap one app to launch it.
How to delete app folders?
Long click on the app folder to bring up its settings panel, and then press the “Delete” button.
You can also edit the folder name and change its order on the same panel.
Drawer Launcher works well in the following devices:
Samsung Galaxy S4, Galaxy Nexus, Nexus 7, HTC One S, Sony Zperia Z, Moto G
Drawer Launcher acts mostly like a sidebar, a dockbar or the Windows start menu.
Download Drawer Launcher now, and make your multitasking to a new level.