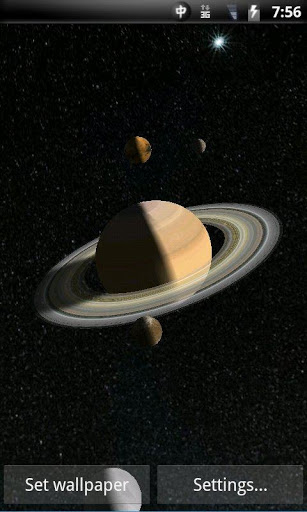 Animated Live 3D Wallpaper of the solar system. This Lite version includes Saturn circled by four of its moons and Earth + Moon with the Sun as Red Giant star with starry background. Slide over the display to move around and double-tap on the screen to switch between the planets.
New feature: use the orientation sensors of your device to look around! Toggle them by double-tapping on the left side of the screen.
This a wallpaper, not a normal app! Activate it by pressing the “Menu” button and selecting “Wallpaper” and then “Live wallpapers”. There you will find “Solar System 3D Lite”.
If you like this wallpaper you might want to check out the PRO version which includes all 8 planets of the Solar System plus Asteroids and Pluto, turns the Sun into a Red Giant as the battery becomes weaker, and much more.
Copy to SD card enabled.
(Note: The displayed moons are for artistic reasons not to scale.)