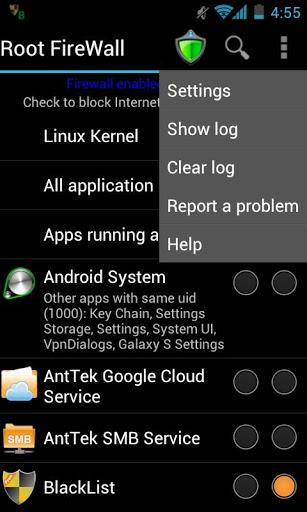 This is the best choice to ad-blocking, prevent data over-billing, save battery life, as well as protect your privacy
Feature:
. Block Internet access for any apps:
. Separate 3G and WiFi data
. One-click widget enabled
. Test blocked app in a touch

More details
. Block Internet access for any apps:
One can select to block a selected application or applications, application running as root. Since it blocks Internet access per application ID (UID in regular Linux system), several applications may be assigned the same ID, you should block all of them or nothing.
. Separate 3G and WiFi data
For each application, you can select to block Internet access via either 3G or WiFi channel. It’ s extremely helpful if you don’t have an unlimited data plan. It saves you from over-billing because of background application accessing Internet such as Google+, Google Play.
. One-click widget enabled
One-click widget is the easiest way to toggle blocking status. It’s useful when you don’t want to use data connection and occasionally turn it on for a while.
. Test blocked app in a touch
Once you block an app, tap on it to see if the application can access to Internet or not.