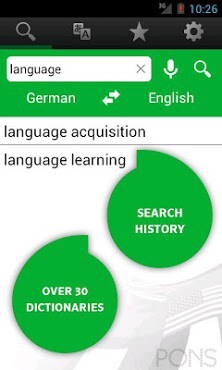 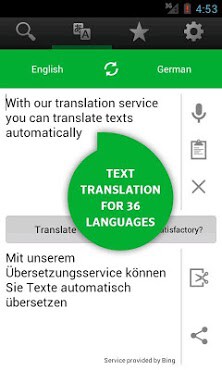 The Free PONS Online Dictionary – with Text Translation
With this app you acquire direct access to all translations in the free PONS Online Dictionary. Translate the words you are looking for in over 30 dictionaries, quickly, easily and reliably – directly from your smart phone.
Our database contains over 12 million words and phrases in 13 languages. The high standards of PONS editorial quality are the key to your success— in this App, too! PONS online editors uphold traditional PONS quality by carefully editing and certifying all entries. New entries and improvements based on user feedback are incorporated into the database on an ongoing basis: a significant benefit whether you use these dictionaries at school, university or language school, at the office or privately.
The Chinese, English, French, German, Greek, Italian, Latin, Polish, Portuguese, Russian, Spanish, Slovenian and Turkish languages are at your disposal in various combinations.
***Furthermore, the PONS Online Dictionary App provides a free machine translation service. Within seconds this service translates simple sentences and texts, providing a rough translation for all of the PONS.com dictionary languages, plus 23 additional languages, including Arabic and Japanese.***
The equally free web version at www.PONS.com offers, in addition, a Visual Dictionary, a translation forum, verb conjugation tables and, last but not least, a vocabulary trainer.
With the PONS Vocabulary Trainer, also available as a free app, you can learn your search terms in various practice modes to achieve lasting success. Don’t forget the words that you’ve looked up: save them from the Online Dictionary directly to your personal vocabulary trainer with a simple click, then practise them at your leisure.

App Functions at a Glance
•    Click on and listen to audio pronunciations
•    “Look-Here”-Function: Magnify the translation, so that you can show it to someone else – especially useful for travel, when you’ve exhausted your repertoire of gestures
•    Favourites List: Save your most-looked up terms
•    Search History: Quickly find your most recent searches
•    Voice input
•    Copy translations to the PONS Vocabulary Trainer
•    Copy translations to the clipboard
•    Over 30 dictionaries in 13 languages
•    Vocabulary updated on a daily basis
•    Information about style and usage, country-specific information
•    Machine Translation for 36 languages!